Reckoning: The Ends of War in Guatemala


They are walking through deep mud, heads stooped in concentration. On their backs rest large wooden boxes, strapped to their bodies with rope. At first glance, the people look like tired travelers, heading home with quotidian belongings. One person, one box.

On closer inspection of the photograph taken by award-winning photographer James Rodriguez , it becomes clear that the boxes are coffins. The process involves locating and exhuming bodies, and building a genetic database to identify victims. The motor of war was conflict between leftist movements, who flourished in the context of rampant agrarian capitalism and oppression of the indigenous Mayan population, and counter-revolutionary forces, often backed by the United States.

A scorched-earth policy in the s in the Mayan highlands aimed to destroy guerilla heartlands — in one village, Las Dos Erres , military soldiers beat children to death and forced pregnant women to miscarry. Eventually all inhabitants were killed. Over 45, men and women were detained by security forces and never seen again.

The war finally ended in But many leaders remained immune from prosecution and Truth Comission reports documenting state responsibility for war crimes, including genocide, were rejected by the government.


Those who did believe in a better life: a life where children get educated, can play an instrument, read the classics, have access to healthcare, and the other resources they need to flourish are just fools who have been bamboozled by leftists who themselves are playing out different roles and have their own hidden agendas The only thing that is real, it seems, is the power of the state. Resistance is futile. These are the gloomy impressions left by Reckoning, a very long book about postwar Guatemala, by Diane Nelson.

The overall impression of hopelessness is a consequence of her key concept: duplicity; about how good people who believed in a better world feel that they have been duped by the people and events of their lives. Torture rooms where holes were dug in the floor to drain the blood Nelson 79 ; frightening angels with human bones as wings 78 , rape houses and mass graves.

These are lasting and powerful images. In India, for example, foreign-funded NGOs have replaced many state functions, and the role of social scientists as consultants for these organizations is not insignificant. In India and certainly in North America, the resurgence of anthropological expertise being sought out by the state in warfare and anti-terrorism projects makes the truths revealed by Nelson salient today, maybe even urgently so.


Her observations on wartime and postwar conditions in Guatemala speak to the situations many anthropologists find themselves in currently. Why then, does Nelson distance herself from these truths with her ambivalent caveat? 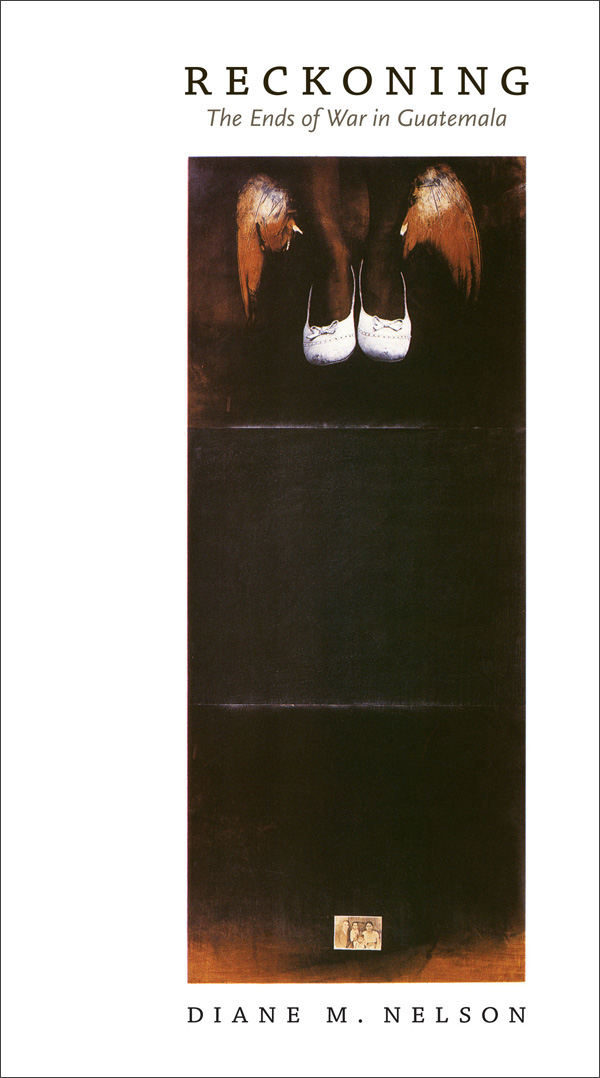 Nelson does not indicate how many people she interviewed, or how representative her data are. This information is important if we are to believe her claim that most Guatemalans have lost hope in making a better life for themselves.

The Ends of War in Guatemala

One can imagine that Nelson may well have interviewed a large number of people as her fieldwork covers a year period, yet the reader is also not told how the interviews were conducted nor the interview style and so on. It could also be the case that she only relied on a few key informants to write this book. She also indicates that she has not lived at the field site fulltime nor can she speak or understand local languages. Local people see her as a gringa xviii a word for foreigners often with negative connotations.

While all this might be an attempt at reflexivity, it might also be seen as a justification for a lack of clarity in her research methods. Linked to this critique is her heavy US cultural bias. Far too often she bombards the reader with US-talk and symbols, assuming that the entire audience ought to be familiar with these terms. This is simply not the case both in terms of her audience or her field site. She claims that Guatemalans heavily consume US horror movies, but if we only interviewed those who consume US popular culture, we would be missing other types of media consumption and it could be a serious misrepresentation.

Worth noting is Chapter Seven on malaria. It focuses on the dual nature of the state to both give life through anti-malarial techniques and take life away through murder of those who did not comply with counterinsurgency. Malaria prevention and treatment were more often than not about the state trying to get people to think it was doing good things by sending an army of public health workers into the highlands for mass vaccinations and various types of malaria treatments.

This is relevant in India where malaria continues to be a major problem for tribal and low- caste people, yet is ignored in favor of heavily funded foreign-based global health initiatives that focus on profit-oriented biotech solutions to health problems. In India, this takes the form of vertical vaccination programs, profit-oriented pharmaceutical development and neo-Malthusian reproductive health education, all forms of biopower that in themselves do not much raise the health status of people.

A strange claim, at a time of massive inequality and uncertainty in American societies, when imperialist wars have spread to Iraq, Afghanistan, and Libya, and when low-intensity warfare or forms of structural violence exists throughout the Americas. Her question of who benefits from distrust?

Yalamala for whom it seems to have been written. I cannot help but ask whether Nelson herself is promoting hopelessness, and who might benefit from that? If anything, the book could discourage anyone, especially students, and maybe anthropologists themselves, from resisting the onslaught of neoliberalism in their own country for fear of retribution or abandonment by progressive forces.